The project is in full swing!

Tweet Share Pin Post Share
The project got a headstart when we played a premiere concert with Revoid Ensemble 29th January in Stockholm (at Teaterstudio Lederman). We had been working with the music for several months preceding the concert, being funded by The Swedish Performing Arts Agency (Statens Musikverk). Below are some photos from the soundcheck! Thus we could start working right away with reflections about such things as how collective improvisation took place in the concert, in relation to pre-composed material and other matters (interaction, ambiguity, etc.); how preparations, rehearsals and other circumstances influenced us; what strategies we want to use for evaluation; and so on. We are now in the process of developing a series of concepts and methods based on these reflections and experiences, and we intend to apply them in a variety of upcoming musical experiments. Some of this material will be presented in a seminar at Stockholm University of Arts (Stockholms Konstnärliga Högskola) on the 28th April. Respondent is Kim Hedås (Senior lecturer composition, Royal College of Music) and moderator is Ole Lützow-Holm (guest professor, Stockholm University of the Arts). We are also working on a research exposition that develops this even further, and which will be accompanied by an in-depth analysis of the concert (with HD-video). Excerpts will soon be presented here at this site, and the full material we intend to publish in the near future. 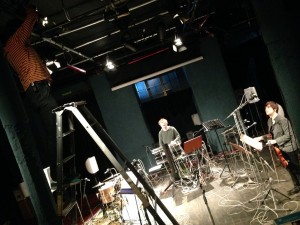 In november we were invited to participate in “Unfolding the Process”, a two-day symposium organised by the Arne Nordheim Centre for…