We are now looking for a more process-oriented modular approach. This requires breaking down the compositions we had previously been working with in Revoid Ensemble, turning them into “abstract” modules that can supply conceptual instructions and/or musical materials in ways that are concrete yet also flexible. We have also started designing new modules, on the basis of all the experiences and various forms of input in the project so far, specifically with the aim of inviting for counterplay and reciprocal interaction, as well as supplying with a wide range of materials that can enable our improvisations not only to consistently explore new territories and challenges but also to draw upon the diverse interests and backgrounds of all the musicians involved.

To assist this process we decided to assemble a conceptual toolbox (see below) that brings together all the concepts we are currently using in the project. This map is helpful when experimenting with how to design and complexify modules. The toolbox is also useful when listening back to recordings and discussing how we perceive the music, in order to find new ways forward. 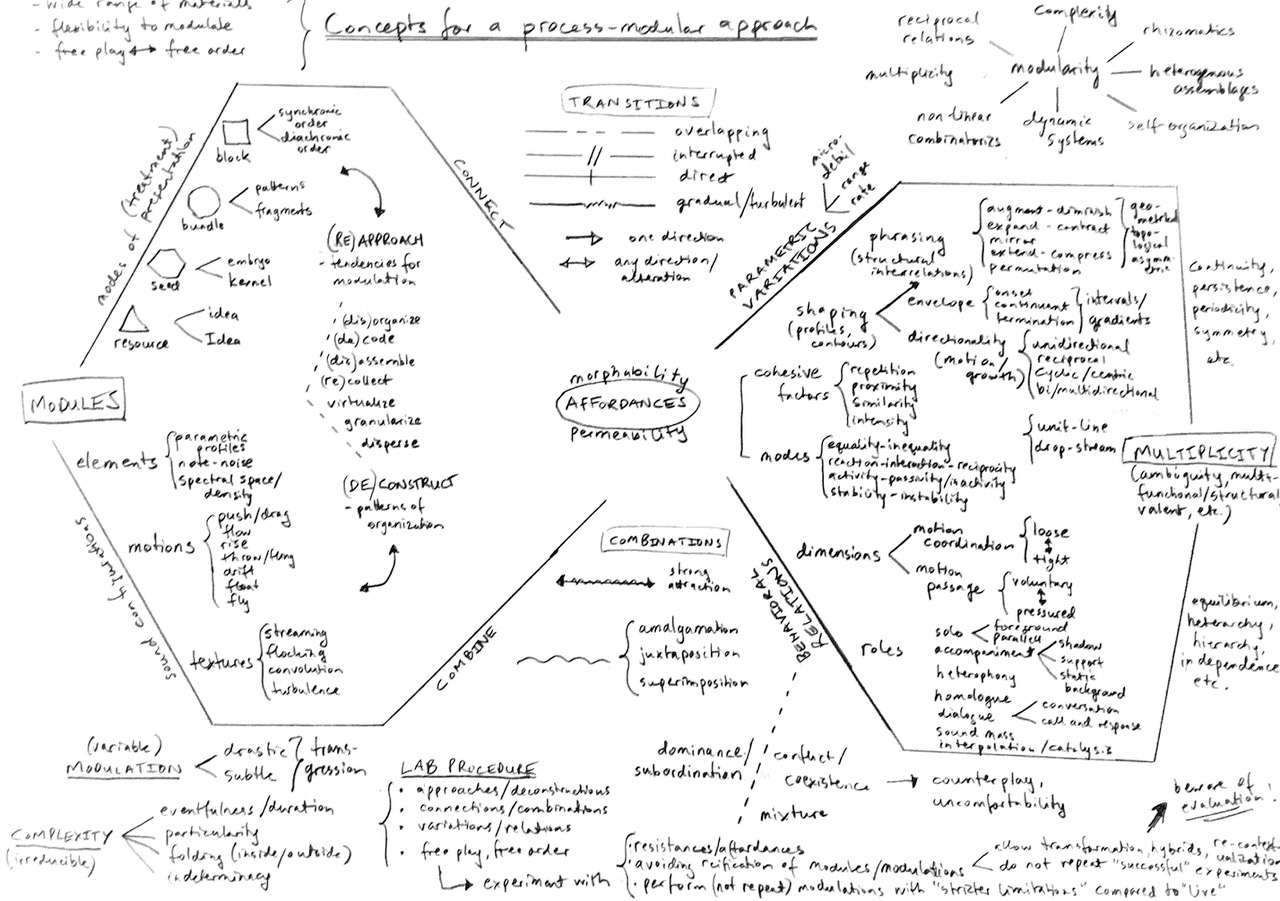 Below is a modular score that works as a mnemonic device and brings together the modules we have at our disposal at this point in the project. Each module has a symbol, a color, as well as a name and/or number, depending on the character of the module. In performance, the modules are surrounded by “free” improvisation in which musical materials have not been pre-decided, although of course drawing upon both individual and collective habits as well as reciprocal interaction (so freedom from idiom or influence is not what is intended here). Within the course of a free improvisation we may then utilize any number of modules, in any order, “picking up” a module depending on what arises in the improvisation, and depending on the initiatives of participating musicians. We see this as a variant of Deleuze and Guattari’s rhizomatic approach: allowing for multiple entry and exit points, or a proliferation of connections. There is no pre-determined origin or endpoint, which invites for a nomadic connectivity of growth and propagation. The modules themselves consistently undergo variations (within and between performances), not least due to the varying contexts of free improvisation. There is also the potential for transgression: significantly departing from a module’s design. All this entails that a particular module might be hardly recognizable between different performances, yet it’s virtual force is nevertheless felt by the musicians.

This contrasts to the methods we used with Revoid Ensemble, in which a large-scale form was predetermined with a set order of “parts”, and where these parts were either freely improvised or more thoroughly pre-composed (even if involving valuable forms of collective improvisation and transitions). In our experience, a process-oriented modular approach allows for more intense reciprocal interaction. Without the constrictions of having to adjust to a large-scale form our improvisations can follow more unpredictable trajectories, which in turn leads to the modules being more noticeably transformed. 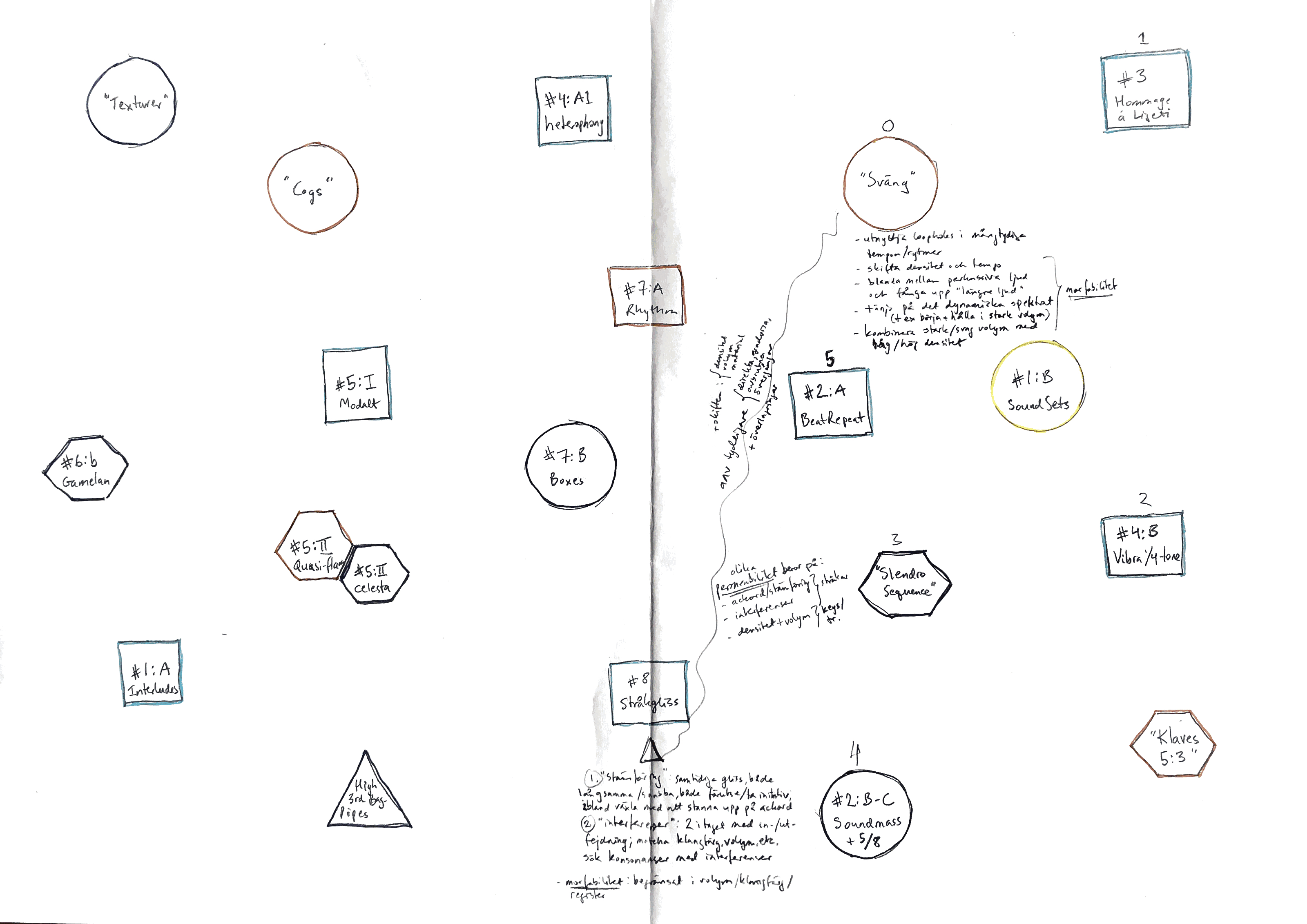 In laboratory experiments (listen below) we try out specific variations of, and transitions between, a chosen set of modules, thereby continuously complexifying their potential. For example, we distinguish between different material usages of, and approaches to, modules (with varying ways of de-constructing, re-organizing, disassembling, densifying, granularizing, and so on). We also explore how modules can be connected to each other with the aid of concepts such as permeability, morphability, and superimposition, amalgamation and role-taking. In this work, we now draw upon studies in spectromorphology and interstructural relations of sound-configurations by James Tenney and Dennis Smalley. Playing around with modules in these experiments creates an evolving reservoir of shared experiences, thereby continuously adding to the potential for improvising with those modules in performance. We make notes from our experiments, which are helpful for retracing our work and when listening back to recordings. We can also re-use the notes to activate new potential. The intention is not to repeat lab experiments in live performance, but the notes can give rise to new ideas and possibilities at a later stage.

We feel that this modular approach will be highly valuable for quasi-systematically exploring the capacity for a variety of musical materials to be used in counterplay and other techniques for disordering. It is also clear that conceptual experimentation can really aid us in inviting for non-control and musical complexity (the combining of heterogeneous elements that differ from each other in some incommensurable way).

In the following experiment we focused on combining sudden attacks and intensity shifts with delayed responses, all within an approach inspired by Ligeti’s “Apparitions” and “Atmospheres” that involved various kinds of textures.

And in this one we tried juxtaposing and transitioning between two modules, with large variations in density, volume and materials. The modules respectively focus on rhythmic interaction and glissandos. With the rhythmic module, the challenge lies in finding what we call “loopholes” within ambiguous tempos and rhythms, allowing for specific forms of interaction in which percussive sounds can be mixed with other sounds, as well as ways of diverging from rhythmic interaction through melodic-harmonic extension or comment. With the glissando module, the challenge lies in the variation between uses of interference tones and various types of mobile harmonic structures – all of which requires a high degree of attention to density and dynamics.