The Diagram and Rhizomatic Scores

This time we had the pleasure to invite composer Kim Hedås and pianist Lisa Ullén for a listening session together, and without focusing on the research aspects. It was really fun, valuable and inspiring for us to hear about their impressions of the music we have made in the project!

The experiments with the new score in April resulted in many important insights. It became clear that we needed to distinguish more carefully between different aspects of how we can use our collection of concept-methods and modules.

The Modulators would benefit from being further developed, as well as being presented in a map of its own, also combined with visualizations that make them easier to relate to. In this way the Modulators could function primarily as a toolbox for designing and re-working experiments for improvisation, particularly in reference to Attractors and Resonators.

Modulators offer us a differentiation of “micro-parameters” that otherwise would arrive in the form of a “macro-block”. With macro-blocks, improvisational trajectories might combine a specific listening strategy with a specific response pattern, as well as with specific sound configurations, rates and directions of change, and so on. This would typically happen due to ingrained habits from past improvisations. Earlier scores used in this project (e.g. with Revoid Ensemble) also moved us in this direction, not least because of the ways in which overall-form and other structural aspects constrained the improvisation from the “outside”, in a top-down approach. By contrast, the Modulators assist us in finding more ways to vary and differently connect things to each other. Similar response patterns and sound configurations, for example, might be connected with different listening modes and different directions of change. This allows for focusing more on details and on differentiation, so that form and development will occur in a bottom-up approach, on the “inside”.

There are now eleven inter-connected Modulators: Listening, Response, Roles, Material, Spectral Space, Spectral Density, Idea, Relations, Change (Rate, Range and Direction), Transitions and Nodes. These are placed in the map in a way that emphasizes connections that may be particularly interesting or relevant to pursue. Ultimately, however, all Modulators are connected and modulate each other. 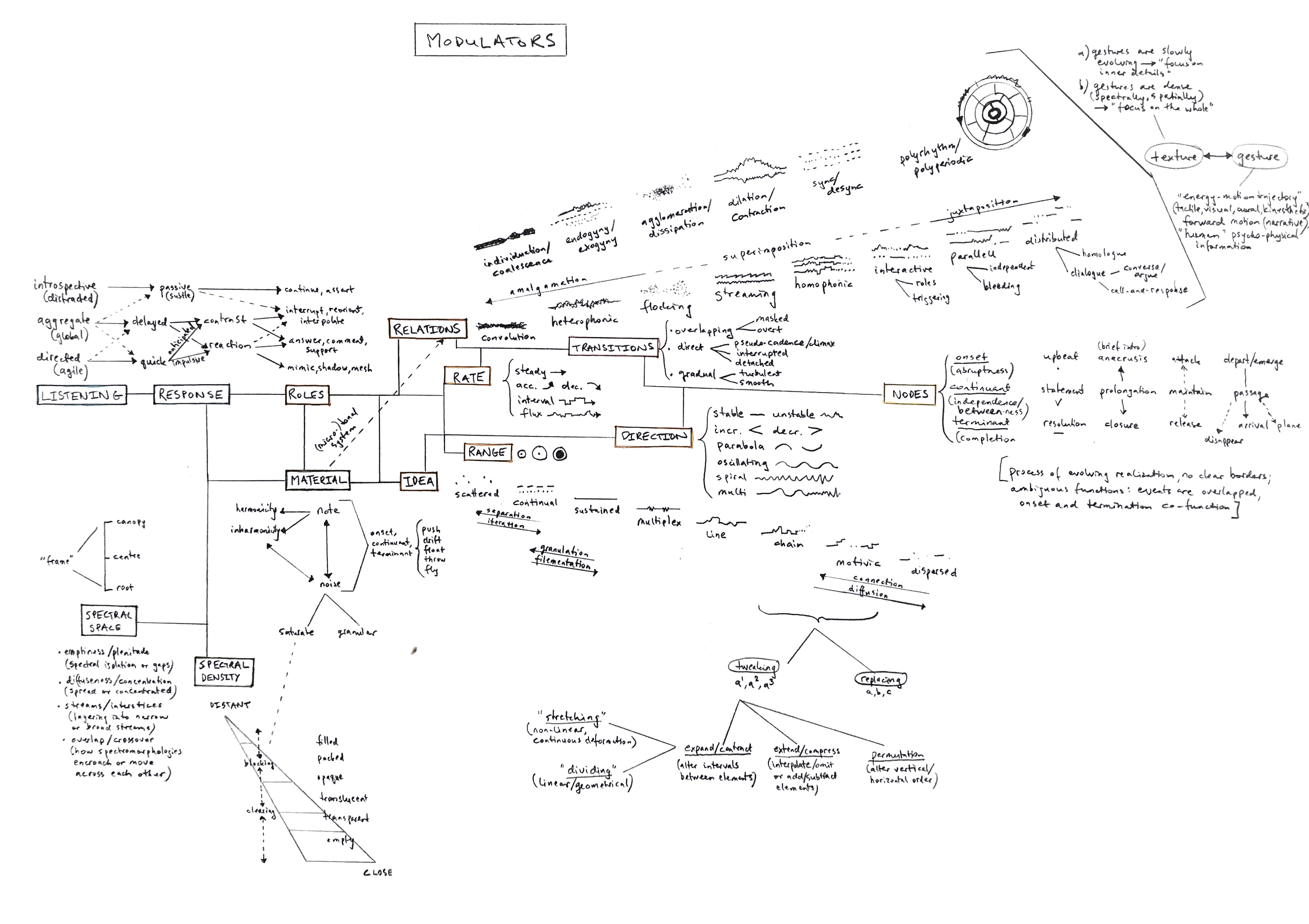 The Diagram focuses on bringing together the collection of concept-methods — Attractors (the clouds), Resonators (boxes) and Connectors (a new concept, the cube in the center) — in a visual design that distributes and connects them in an open style. The Diagram is multifunctional: it is a working material, a mnemonic device, an overview, an analysis or “meta-model”, and a catalyst, all depending on the context. By supplying an overview of what we have done, it pushes our work onwards by inviting for new connections and developments, and the visualized format can engage our thoughts and practices in unpredictable ways.

As a working material, the Diagram could be used in tandem with the Modulators to consistently explore new ways for experimental variation. When designing experiments we can make a selection of Attractors, Resonators and/or Connectors, discuss how they can be varied (by referring to the Modulators), conduct a series of experiments (because differences between and within experiments will say something significant), and discuss how we perceived what happened and how things continue to change. For example, we might try a combination of two Attractors (transitioning between them, or allowing them to hybridize with each other); or we could experiment with how an Attractor may be influenced by a Resonator in various ways; or how a Connector may connect two Resonators or Attractors. The ambition is not, however, to do improvisations that involve the Diagram as a whole, so in this sense it does not function as a score. 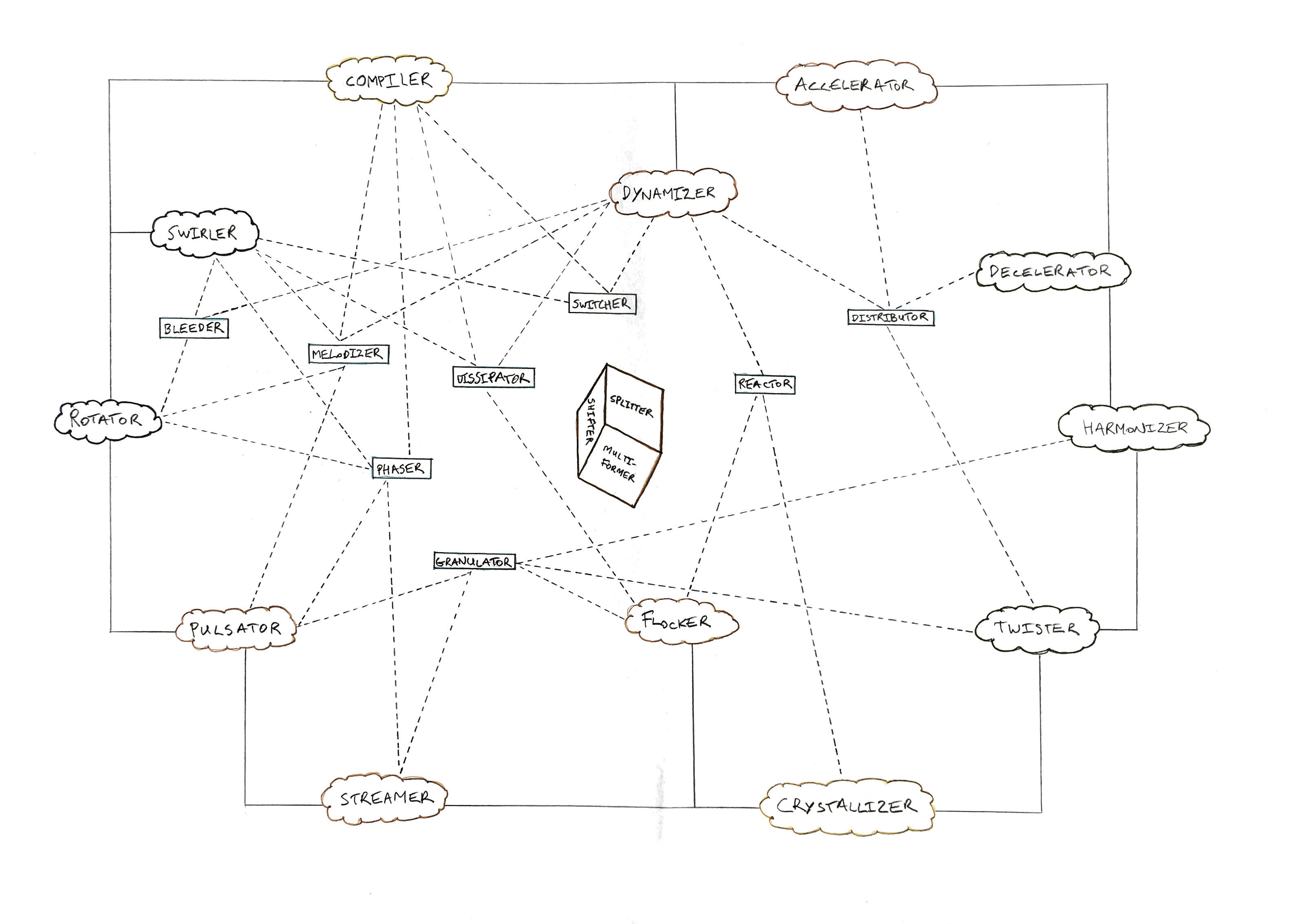 The incentive for Rhizomatic Scores is to narrow the possibilities of which components are in use. This was one important insight from the session in April: a smaller selection may affect the improvisation in many ways, not least by increasing the probability for certain collective behaviours to emerge and by influencing the ways we listen to each other. Rhizomatic Scores are thus intended for performance, and different combinations will offer various challenges as well as opportunities. The layout retains the colours, figures, relative placements and connections from the Diagram, in order to invite for a transfer of “practical knowledge” from experiments with the Diagram.

Within the course of an improvisation we could utilize or become attracted to any number of components in the score, in any order. The scores are also surrounded by “free” improvisation in which components are not actively pursued, thus inviting for unpredictable ways of entering into a component. We see this as a variant of Deleuze and Guattari’s (2004b) rhizomatic approach: allowing for multiple entry and exit points, and a proliferation of connections. In April we discussed the possibilities of distinguishing between different approaches to the score, in order to avoid a confusion that negatively affects one’s concentration and listening (e.g., as expectations or hesitations). Approaches could thus range from being relatively “firm” to more “open”. 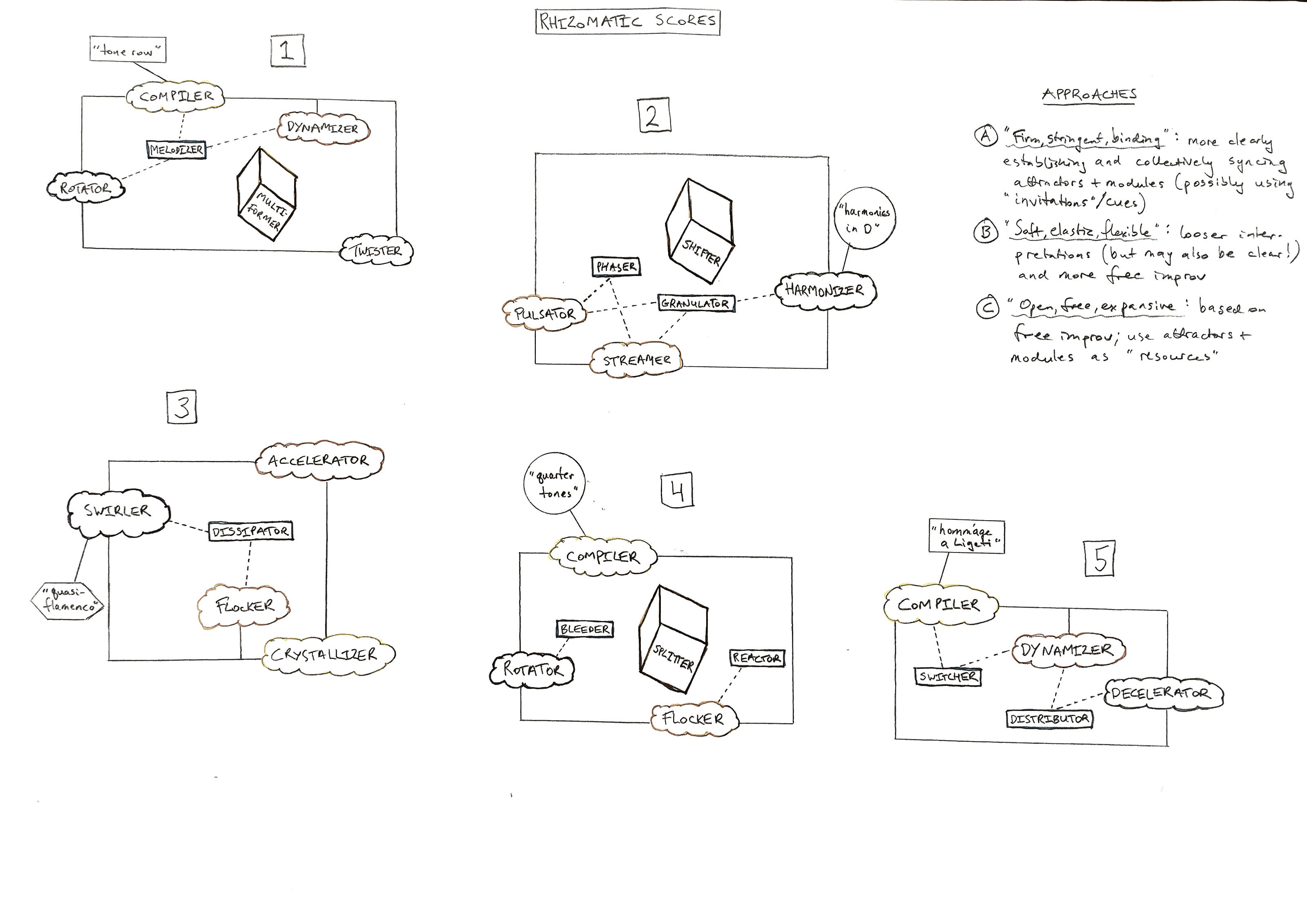 “We convened for one of the group’s intensive research workshops, comprised of three 8-hour days concentrated entirely on developing our improvisational work with the Modulators. Each module is almost like a sigil; a concentrated symbol of a whole set of processes and experiences in musical form that the group has undergone together. Some come directly from earlier scores or structures we have used, others emerged from themes around ongoing conversations. This map leads us directly back into the music itself, where these forms and ideas developed as only playing could make them. The really interesting part was when we started combining modules. To take, for example, the experience of playing the Johnston/Ligetti material, and combine it with something like poly-periodicity, which emerged early when Ricard gave us a workshop on some of his ideas around cyclical rhythms– to take such separate strands of creation and inquiry from our process and combine them yielded musics at once familiar and wholly new. Although we have called these “Scores” these new devices with the Modulators are more like navigational charts drawn from mythic constellations or legends of vanished islands. In containing sparse information, which in turn implies a host of experiential information, they contain both ordered collections of activity and doors to wholly new and not-ordered ways to play.”

Category The Diagram and Rhizomatic Scores