Klas and I met at my place to work on some rhythmic material and to play around with our machines, Klas with his “Xronomorph” software and myself using the Elektron Analog Rytm.

We started off with having the two machines provide non-synced (different tempo) rhythms in an attempt to produce a form of ambiguous looping that one can enter at any point in time and that has several possible interpretations. We asked questions whether the individual rhythms needs to be constructed in particular ways, perhaps avoiding short and very symmetrical structures, in order for them to be combinable in this way. And we tried changing tempos up and down, listening for more or less fruitful relations as a consequence.

We then tried some new approaches to a rhythmic loop I call 13 on the Floor, and that has been with us in different versions since the beginning of the Revoid Ensemble in 2015. Our attempt now was to deconstruct the rhythm so that we’d be able to use it more as a polyrythm, moving freely between the rhythm’s three voicings.

Some work was also done on the 5 + 3 =? material, where we combine “claves” of different meters, arranged around the same one. In this particular polymeter it’s a nesting of a 5/4 clave inside a 3/4 (sometimes 12/8).

During the last months I have spent considerable time developing my setup to allow for live usage of audio synthesis, microtonality and applications for complex polyrhythms (e.g, Xronomorph, Patterning). This has now resulted in a versatile setup with  the following equipment [see hardware routing below]: Moog Little Phatty (microtonally retunable, plus 3 Moogerfoogers [Ring Modulator, Delay & and Control Processor]); computer with Ableton Live and a host of software (such as U-He, Aalto, Reaktor, Kaivo, Largo, Pianoteq, Soniccoutore, IRCAMAX, Granulator, etc.); midi controllers VAX77 keyboard (very dynamic, supports polyphonic aftertouch), Lemur (iPad), Ableton Push 2, Novation Launch Control, and MacMillan’s 12-step and QuNeo. I also use an Arturia MiniBrute, a microtonally retuned acoustic harp zither, and a Kalimba for recording samples to be used in live-processing.

In Ableton Live, I’m now using a complex audio routing system [see below] with more than 160 tracks that are controlled primarily by my own Lemur programming (iPad) and ClyphX commands.

Regarding intonation, I have been exploring how to use Just Intonation and other microtonal retuning on the fly, with Reaper plugin “Alt-tuner” routed in/out to Ableton Live. This also requires a visualization system that makes it possible to quickly orient myself (see further below, for a visualization of 7-limit Just Intonation). One of several important musical inspirational resources that I have been particularly studying is Ben Johnston’s string quartets and piano works. 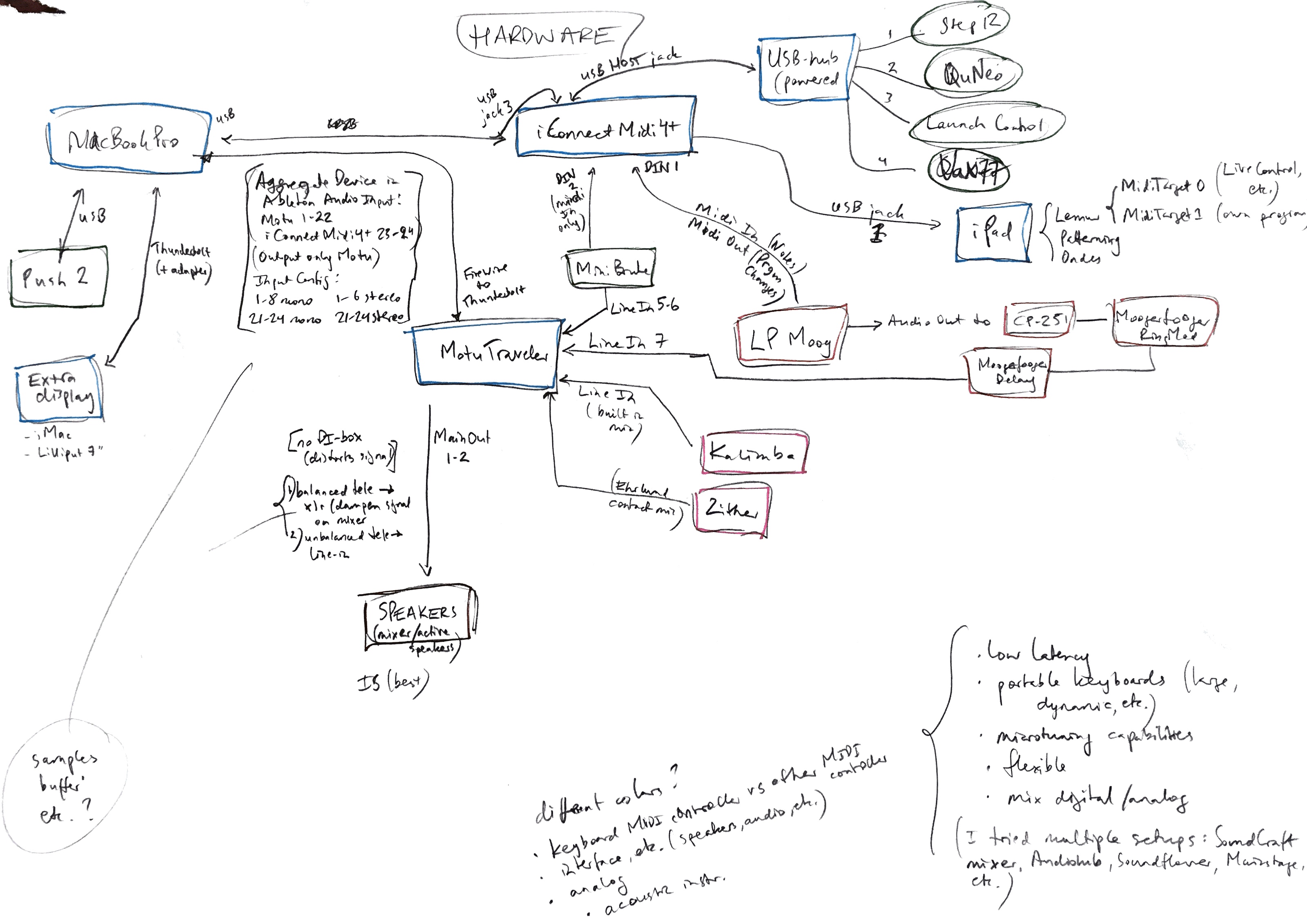 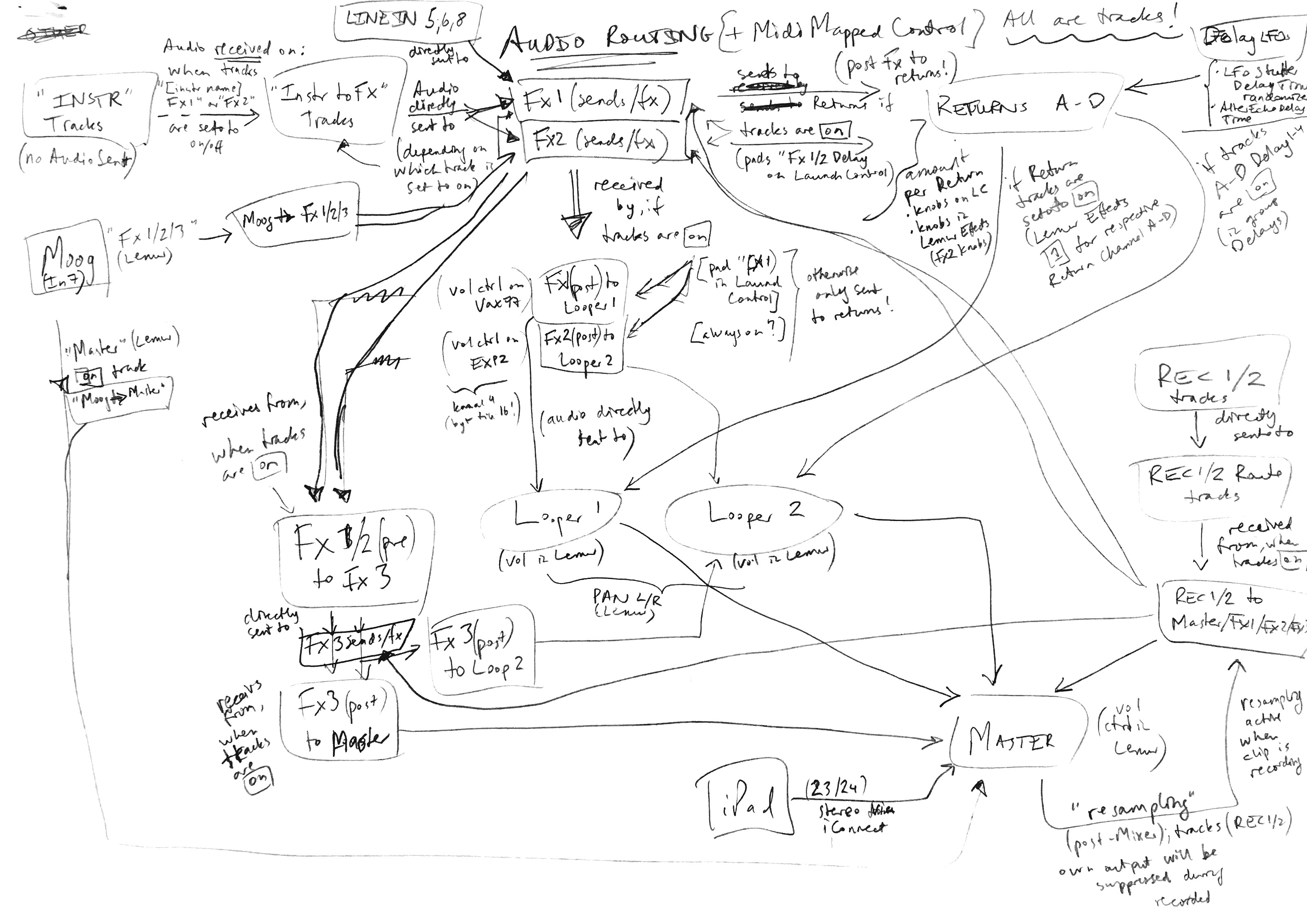 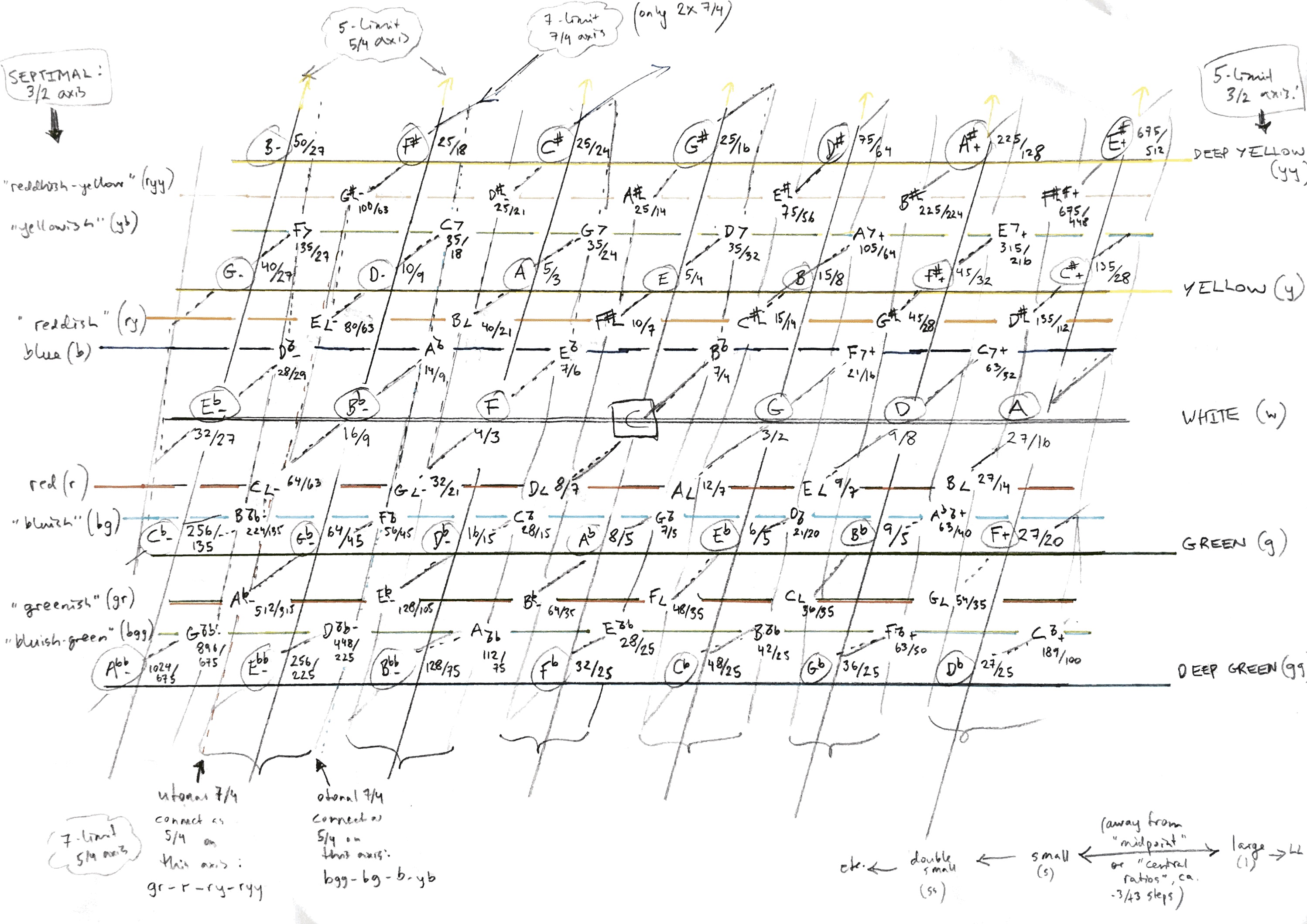