In the above video we are using what we call a block module (see score below). String and wind instruments follow a tone row in which timing, dynamics and sound color are freely varied, and with certain cued points of synchronization to produce contrasts in the flow. This is juxtaposed with more freely improvised events in drums and keyboards, including randomization by audio effects. Taken together, all instruments create a multi-structural complexity that then progressively transitions into a sound mass created by non-synchronized drills. Several methods for disordering are thus used here, involving a non-linear variation that can produce rather different results between performances. Drums first pursue an ostinato in it’s own separate tempo, creating a line that can be heard ambiguously as both a static background (supplying stability) or as a soloistic foreground. Ricard uses an irregular time period, which makes it more accessible and flexible, otherwise it might have become more dominant. The keyboard’s lines of variation contrast to the drums with an explicit non-control of tempo made possible by randomization, delay effects and various feedback mechanisms between machine and performer. 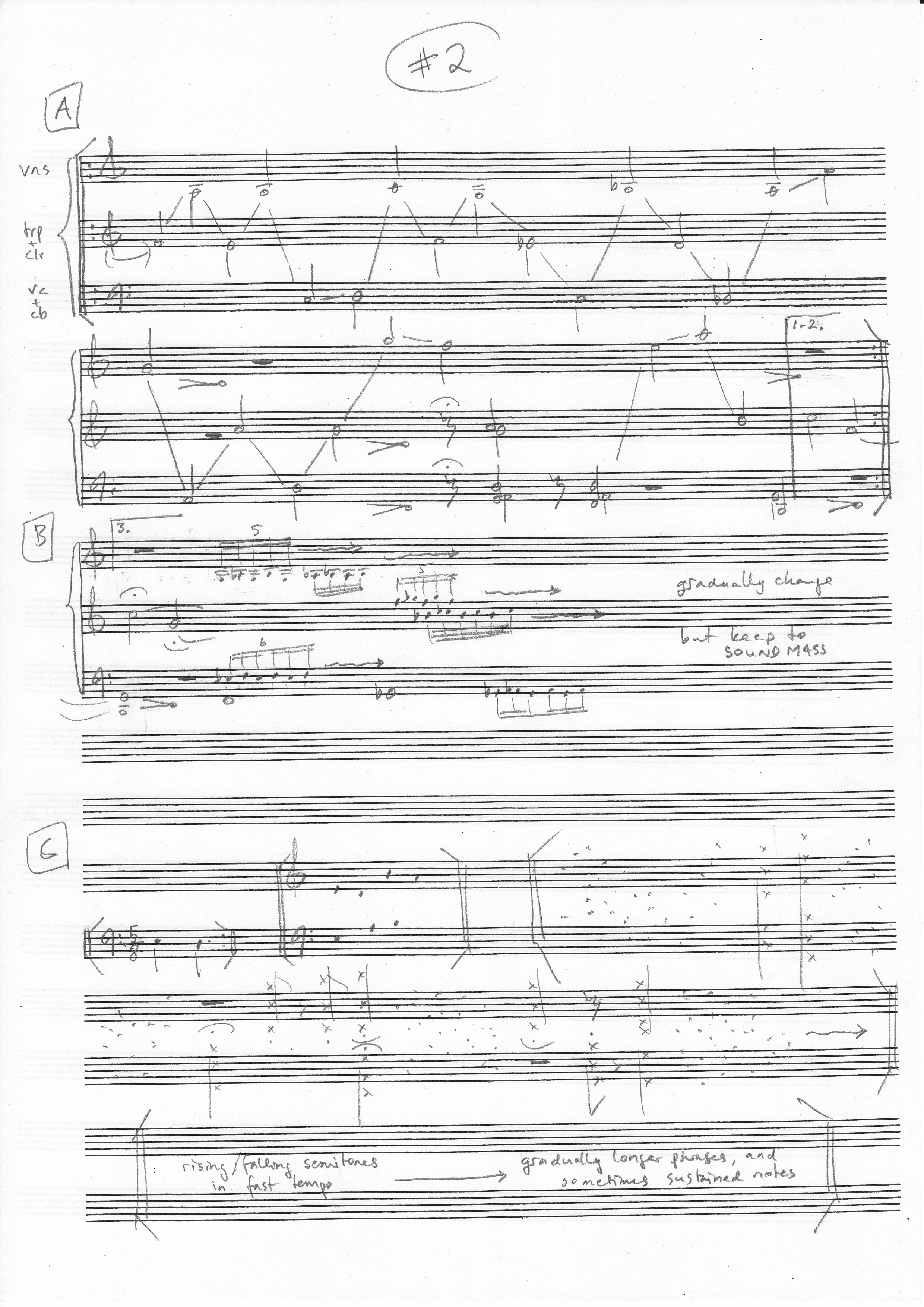 At the beginning of the project we sat down for a discussion, Anna, Ricard, Klas and I. I found myself telling the group something I had thought about all along – that Klas’ music comes for me as a direct descendant of the original Third Stream movement. We discussed Gunther Schuller, Joe Maneri, and Ran Blake as connections from USA, which are rare for me in Stockholm (the only other musician I have met here who resonate with me in this particular way is Fredrik Ljungkvist). Although the heyday of the third stream movement was long before the advent of practice-led or artistic research, I see some parallels in this formative movement. Schuller and his many colleagues were trying to bring order to the vast plethora of musics they were playing and interacting with during the burgeoning musical and artistic movements of the New York and east coast they inhabited. Joe Maneri in particular spoke often when I knew him of all the varied musics and environments he found himself in. One day playing a Greek wedding, the next in a jazz dance band, the following studying serialism. The ”third” kind of music was, for Schuller, a melding of the different jazz and classical music contexts he was working in. A synergistic bringing together of diverse and even conflictual elements.

Klas’ music for ensembles I have played in with him over the last few years has deepened and expanded to fit this new group, part free improvisational group, part jazz ensemble, part contemporary music chamber group. The modular compositions for this group struck me immediately as an outgrowth of the earlier model of tunes and pieces- a bringing together of the elements of all into this new system, which I look forward to seeing grow. I see each module as a kind of seed, each of which could contain a long and very detailed piece containing its elements.

The compositions inspired by Ligeti are a direct continuation and development of a set the Quintet did where we played an arranged version of the 8th Movement of Ligeti’s Musica Ricercata. I wonder now if we can learn to improvise on this delicate, complex material. It strikes me always, both in the case of Ligeti’s music and in the case of Klas’, as a point of order, peace and symmetry in the music. Perhaps working on bringing the subtlety of ambiguity to this material would be an interesting direction to take around it. Ligeti’s string quartet material also figures as a great inspiration for this work.

The just intonation material, which I first saw used in material for the quintet, has also deepened and developed. In seeing Klas’ ever-growing set-up, based on just intonation and synthesis, I contemplate my own practice around microtonality, which is a strange and anecdotally driven mixture of a well-tempered system of 72 pitches learned many years ago from Joe Maneri, the natural just intonation which arises from many extended techniques on my instrument, and my practice in electro-acoustic composition where tonalities are draw from concrete materials and the various sounds offered by the Buchla synthesizers I have been working with. I have also thought to revisit some of Lou Harrison’s work before our next session, since I know that his work figures as a strong influence in Klas’ microtonal work. I wonder if there are electro-acoustic composers we might look into together as well, since Klas is working so heavily with electronic instruments in order to access a full palette of microtonal possibilities.

Heterophony is a feature of the work in this ensemble which I have found extremely rare in most of the improvised music I have played or encountered, although I have worked with it during the years I played other sorts of musics where it is more common, most especially ottoman music for the sema ceremony. It offers a subtle and brilliant balance between the individual and the collective, and also between order and disorder, especially in the way it can fall apart at any moment.

The modularity of the compositions for this first meeting and concert was fascinating to work with. I wonder if there is some way we might try to work with the spectrum of blocks versus morphing in our more freely improvised pieces next time, since the meta-form contains blocks with improvised transitions.

It was (and always is) a pleasure to work with Petter Hölaas from Intelligent sound. This ensemble has developed a very interesting relationship to the relationship between the electronic and the acoustic, including the choice to work with this particular engineer and his very keen and specialized way of listening and building speakers. Klas’ rack of keyboards dominated the center of  the stage like a starship with tendrils reaching all about us. Somehow the marvelous set-up of mic-ing, monitoring and amplification, which makes even the softest playing come through, matched that impressive visual presence. The entire set-up mirrors a way of thinking about the spectrum between the acoustic and the electronic which I have never encountered before at all. This is something we could discuss further. In some way it also contains the order-disorder dichotomy in the way the hyper exactitude of the electronics, as well as that which the microtonal ideas and some of the composers we are exploring, contrast with the fluidity and the forms and way of improvising we are looking at.

The concert was a very focused experience for me. Although I had been listening to the music all week in our rehearsals, it was here that I really heard and felt the string arranging. Audrey’s background in musics quite different from the rest of the group is a really fascinating sound world, and really brings the electronic instruments Klas is using together with the acoustic ones in special ways. We worked a great deal on timbre qualities and transitions during the week of rehearsals, and I felt this showed well in the in concert.

I have the idea of these pieces as places in some respect- almost like each numbered section is a kind of garden of sound ”plants”. One walks through it as a labyrinth or arboretum, grown at the intersection of the most refined forms of architecture and molding of the earth, and the most chaotic forms of plant life and the chaos of the soil. The music in the concert came together as neither precise nor ambiguous, but as a very precise ambiguity. There is much in the music which makes me think that, beside the question of order and chaos, there might be a question of all the balance points, which contain both and are thus rendered a third object of synergy.